9 Ways You Can Peacefully Tackle Your Narcissistic Mother In Law 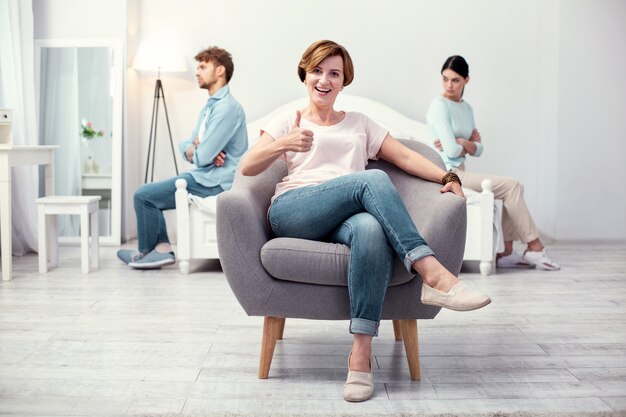 Life after marriage is a treacherous path that one has to carefully cross. Your troubles can multiply even more if you’ve fatefully had a run-in with a narcissistic mother-in-law. Narcissism is a personality disorder and dealing with someone who has it can be a grueling experience. Has your mother-in-law’s entire demeanor been bothering you lately? It’s practically impossible to have a perfect relationship with anyone let alone your mother-in-law. Despite your best efforts, certain relationships never tend to become as easygoing as you’d want them to be.

You can’t simply ignore her patronizing and ego-centric behavior towards you. This is why you’re going to need some peaceful approaches that would keep you grounded. Before that, we need to seal the deal first and tick off the following telltale signs of a narcissistic mother in law;

A narcissistic mother-in-law will always require constant attention and admiration. It’s harder for her to digest the fact that the limelight can’t always fall on her. She’d always want to be the center of attention on someone else’s special day. She will try to fish for more compliments by purposely trying to put herself down in front of others.

When that attention’s taken away from her she might respond in a subtle negative tone or have a complete meltdown. She might complain that no one loves or cares for her enough, even though the reality would be quite the contrary. Lastly, their self-centered nature takes away their ability to care for someone else’s happiness or pain as she perceives the world revolves around them.

When something doesn’t turn up according to their expectations, a narcissist can rarely hold up their cool. Apart from employing manipulative tactics to turn around the scenario in their favor, narcissists often turn aggressive. Your mother-in-law might turn suddenly hostile towards you and disengage for a while. She will try to keep tabs on your flaws, plan out a revenge strategy instead of actually moving on like an adult.

The situation can go as far as her cutting ties with you until you partially or entirely agree with what she’s saying. Narcissists often can’t digest the fact that someone else might not get along with their directions. Thus, they often react more strongly to such unexpected responses. A great example of this would be; your mother-in-law’s silent treatment towards you after a small disagreement.

If you’re dealing with a narcissistic mother-in-law, then there’s a red flag that would seal the deal for you. Narcissistic folks tend to be a bit more controlling than others. For instance, she would try to make sure that every little detail is shaped according to her choice. People who are dealing with narcissistic mother-in-law often tend to complain about how she relentlessly involves herself in the personal matters of a couple. 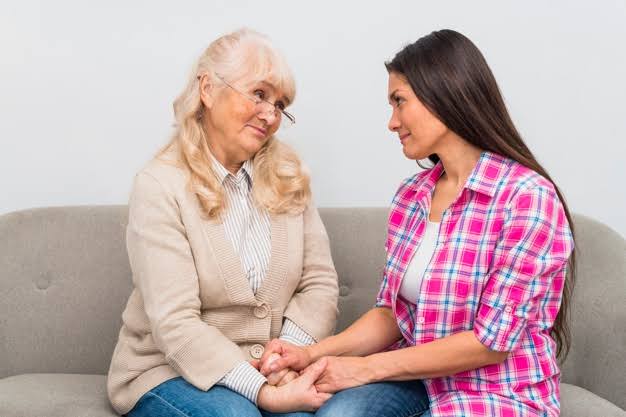 The lack of empathy exhibited by a narcissistic mother-in-law can really alter relationship dynamics. Such individuals are rarely on good terms with their close or extended family because everyone’s annoyed by their lack of empathy. She might be too self-involved to notice that someone else needs their support. Her lack of concern might come as a shock to you as she can be very dismissive of your experiences. She will try to cut you off mid-conversation and close the matter without taking your valid opinion.

If there’s one thing narcissists know best, it’s to manipulate others. A narcissistic mother-in-law won’t shy away from guilt-tripping you even when she’s the one who’s in the wrong. They always assume the worse in others and hold themselves in high esteem. This gives them the liberty to make you look like the bad guy and herself as the victim in every situation. The situation can turn very extreme if she uses this tool to create distance between you and your partner. She will outright lie to you or others instead of admitting her own fault because maintaining a good appearance means everything to a narcissistic mother-in-law.

Narcissists are always on the run to one-up someone else’s accomplishments. They always want to be the most successful, more appealing, and most accomplished people in the room. Their ego-driven behavior often takes away their ability to read the room. Someone else’s success always seems like a call for competition to them.

Thus, a narcissistic mother-in-law will relentlessly try to compete for the highest spot in the house. You might also notice that she wants to compete for your spouse’s love and attention even though there’s absolutely no need for that. She’d try to insult you by publically shaming you in front of others and comparing you to herself. It’s a very successful tactics manipulators use to lower down the other person’s self-esteem.

Before you actually start labeling someone or categorizing someone as a narcissist it’s necessary to do some groundwork. Of course, you’re allowed to have some doubts about the scary situation you’re in. To convert your doubts into belief you can read articles online or utilize relevant literature. This is going to bring forth two kinds of advantages. First and foremost, you won’t be doubting what you’ve discovered for another second. Thus, you’ll be well aware that the person who’s antagonizing you isn’t like any other person who’s casually against you. Secondly, reading up material relevant to this personality disorder can actually prepare you for the future. Consequently, you’ll be able to find strategies and approaches that are more in your favor.

Talk To Your Partner

You need someone to rely on for support, especially in a situation like this. Who’s better than your spouse in that case? Talk to your partner about the troubles you’ve been facing while dealing with his/her mother. Voice out your concerns in a calm manner and share how detrimental all of this is for your well-being. Give them the time to process this information before you both try to find a solution to this issue. At the end of the day, it’s your partner’s mother thus if he/she was initially unaware, he/she might need some time to actualize what’s been happening.

If you’ve voiced your concerns with your partner the next step should be setting some ground rules. If your spouse is truly understanding he/she will understand why you don’t want to mingle with your narcissistic mother-in-law so casually. Instead of stopping your partner from meeting his/her, parents find a way that suits you both. Take an initiative for your sake and stick to it. If someone’s bad for you, you need to create some distance. If the situation turns out to be too extreme from your mother-in-law’s end you deserve the right to stop her from visiting your house.

Don’t Be Embarrassed While Taking The Escape Route

If you’ve tried your very best but faced disappointment, then you deserve the right to remove yourself from that toxic situation. Your mental and emotional wellbeing should never be compromised. Dealing with a narcissist is visibly exhausting and you can’t fix this situation unless they actually want to get better. So, talk to your spouse regarding this scenario.

Maybe you both can move out of a shared house or move to a locality slightly farther from your mother-in-law’s residence. This minimizes your chances of encountering her. You shouldn’t feel any shame in skipping over certain social events where you could possibly run into her. There should be no shame in taking the escape route because you just want to maintain your sanity.

A self-centered individual loves being the sole savior in other people’s troubles. That’s because it places them in the limelight not because they feel any sort of empathy towards the person who needs them. A narcissist loves feeling needed. The fact that others depend on them gives their ego a major boost. So, try to create scenarios that make your mother-in-law feel more needed. It could be anything starting from simple house chores to straightforward outdoor tasks. Consequently, she will feel more appreciated and create less trouble for you. 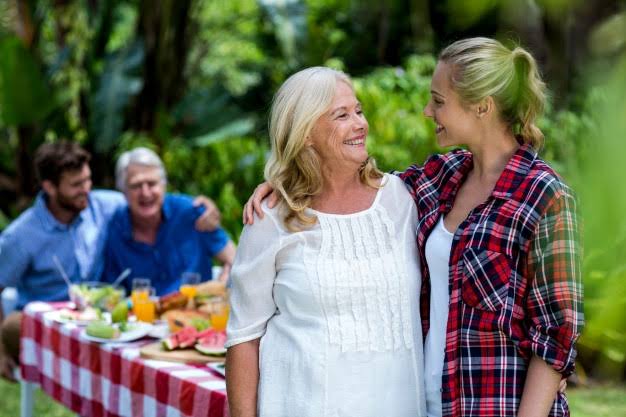 Find Strategies To Maintain Your Cool

There’s only so much you can take from a problematic individual. If your narcissistic mother-in-law permanently resides with you, anger, exhaustion, and anxiety might become a casual occurrence in your routine. If you’re frustrated, you can’t make that person disappear entirely from your life. Yet, you can still find ways that cool you down when you’re too overwhelmed.

You definitely won’t wish for things to get aggressive or too over the top. So, find approaches that help you calm down when you need to feel peaceful and grounded. Meditation and performing breathing exercises during an anxiety-fueled encounter with your mother on law can help normalize you.

Patience Is The Key

It might seem like a cliché but how can you possibly answer toxicity with even more toxicity. If your mother-in-law repeatedly pushes your button, it can force you into choosing something extreme. Anger brings the worse out of anyone which is being patient is the key. Leave the room instead of shouting or getting aggressive.

Don’t Try To Alter What You Can’t Alter

You can’t change her! This is something you’d have to remember from the get-go. You can talk to her, initiate a conversation that can help her realize the damage she is causing. Yet, you can’t alter someone else’s personality unless they actually want to seek professional assistance. So, save yourself some extra trouble by not worrying about achieving something impossible.

Undo The Damage After Any Interaction

Taking care of yourself after interacting with someone this toxic, is an absolute necessity. A great way of undoing the damage could be letting your feelings out in a much healthier way. Talking about what you’re feeling to a counselor or a therapist is an extremely healthy way of coping. It helps you analyze the situation much more healthily instead of dwelling on it in silence. If talking with someone else isn’t preferable for you, you can keep a journal. It’s a great way of debriefing at the end of every day as it sets everything into perspective.

Seeking family counseling is an excellent way of conjuring up a solution in this scenario. Lastly, don’t let anyone talk to you out of the boundaries you’ve set for your well-being. You don’t deserve to be the target of your mother-in-law’s constant criticism and meaningless jabs. Your worries are absolutely valid and you need your partner’s support to get through this.