Trouble In Paradise: Why Is My Wife Acting Crazy? 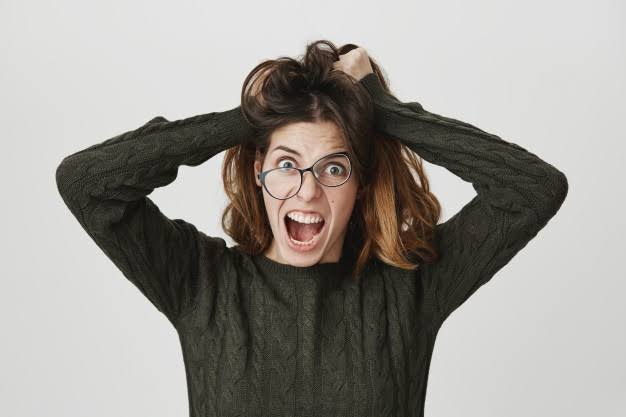 As a society, we tend to use the term “crazy wife” a little too liberally. So before we proceed, it’s important to establish that without any professional history in the field of psychology you simply cannot label someone as clinically crazy. Although some red flags can still have your alarm bells tolling. If you feel like you’re dealing with a crazy wife at the moment then you’re obviously noticing the changes in her.

If you’ve been married to your wife for a while then your worries might seem more worrisome. On the contrary, someone who’s recently been married just might be dealing with the end of the honeymoon phase. Likely, your wife was always this moody and you’re just now realizing it after the brand new marital bliss wore off.

If you’re willing to work on this relationship and rekindle that old bond, you should be finding out the reason behind these recent changes in your wife. Here are some reasons why your wife’s been acting crazy and a guide on how you can manage this situation more healthily. Husbands are more likely of labeling their wife as a crazy individual if;

Why Has My Wife Suddenly Started Acting Crazy?

Here are some probable reasons someone in a situation like yours should be looking out for;

10 Trusted Ways Of Dealing With A Crazy Wife

Dealing with an aggravated person can aggravate you too. You’re only human and you can easily have some tempting thoughts. Someone who’s more worried about saving face instead of saving a marriage might poke fun and taunt their partner while they’re going off on a crazy rant. Talk to yourself and calm yourself down first because you need to lock away these tempting thoughts somewhere inside you.

Your foremost priority would be sorting the mess, making your spouse return to normalcy, and establishing peace inside the house. One doesn’t establish peace by throwing rocks on glasshouses. So, remind yourself why you are doing what you’re doing as it will inhibit your tendency to say something mean to an already sensitive person.

Establish Influence Instead Of Establishing Control

If your spouse is going through the motions then exposing your control and rage should be the last thing on your mind. Instead of establishing control on your spouse find a way to influence them into bettering their behavior towards you. Establishing active communication is the best way to influence anyone. There’s so much you can do by simply sharing whatever’s on your mind. Perhaps letting your perspective out will give your wife a chance of seeing things from a new angle.

Answering irrationality with more irrationality will have you stuck in a long loop of craziness.  that’s probably something you won’t want as it would affect your everyday routine emotional well being and it also has the tendency of causing extreme stress. The best way of wrapping up the mess is by acting more sensible and becoming the pillar of support your wife needs. If your spouse is acting up, you might want to reciprocate similarly and might even try to match their energy. Doing this might give you the temporary relief and ego boost you need by getting back at your crazy partner but in reality, you might not be looking at the long-term consequences.

Try to calm your wife down, perform breathing exercises with her instead of riling her up with your harsh responses. Someone who’s in the middle of panicking probably doesn’t even realize the harshness of their words. That’s why you need to be the rational partner in this situation until your spouse returns to his/her senses once again. Furthermore, while your spouse is in the middle of acting crazy let them know that you understand why they’re acting this way. Your responses should reflect that you understand the gravity of your spouse’s worries. Consequently, they’ll feel more supported instead of feeling more opposed to their own partner.

Trace Your Steps Back To The Good Times

A partner who tends to act crazy now and then can push anyone to their extreme. People react differently, some tend to stay so they can fight against the troubles but some choose the escape root. Whenever you feel the urge to let go of your marriage and your wife, try to look back at the good parts. Tracing your memories with your wife can give you a soothing tap on the shoulder and remind you why you’re both together. It’s a subtle reminder that not only fills you up with hope but also gives you the courage to stay back and stand beside the person you still love.

If you really want to end an argument for good, the first rule is finding a common ground. Once you’ve clearly understood why your wife tends to act crazy every now and then, it’s time for both of you to metaphorically join heads. Time to have a long-overdue conversation and establish a solution that will favor both of you. For instance; your wife might be nagging you out because you haven’t been spending much quality time with her. Common ground, in this case, would be dedicating some days or hours of the week solely for spending time at home with your wife. Another alternative would be dedicating a night of the week as “date night” for both of you. Finding a common ground is perhaps the easiest way of dealing with a crazy wife because once you wither away from the reason behind acting crazy, your spouse calms down on their own.

Violence Is Never The Answer

Someone’s nagging behavior can really push you to your limits.  Yet you must remember that violence is never the answer to any problem. Even if you feel like you can control the situation and put your wife into her place by using a little force,  this very idea is absolutely unreasonable. Violence only makes matters worse for yourself and for the relationship you share with your wife.  It is downright abusive and being abusive isn’t just morally wrong,  it can also cost you long-term prison time.

Matters can be resolved by talking and even if both of you don’t agree on a single thing you can always go your separate ways instead of ending things on a bad note. If you seem to have any violent urges regarding your wife then you should be seeking help because it’s absolutely not normal. Leave the room or the house for a quick minute if you feel like you are losing your temper in the middle of an argument with your wife. Learn ways to manage your anger issues and aggressive urges.

Don’t Be Stingy While Reflecting On Your Actions

The reason behind your wife’s supposed “craziness” could be your own lackings.  We’re only human that’s why we tend to make errors every now and then. These errors and lackings tend to leave a long-lasting impact on our relationships.  The only reasonable thing to be done in that case is to reflect on these actions and then make amendments for them. To make amendments, you first need to accept the fact that you could be wrong in that situation as well.

T accountability doesn’t make you a smaller person instead it proves that you are willing to work on yourself for the betterment of your relationship. Once you reflect on the past and take a look at the way you’ve been acting you might be able to understand why your wife has been acting so crazy lately. The entire reason behind her meltdowns cannot be pinned on just her because one way or another you might be at fault too.

Let The Cool Off Period Prevail

Giving your spouse space after an argument or a crazy meltdown can do wonders. It’s the cool-off period that prevails right after a huge meltdown. Some women tend to act more reclusive during this cool-off period; not socially engaging with anyone inside the house if not required, spending more time alone, missing out on work or any pre-planned activities, etc. It’s your job to let this cool-off period prevail instead of poking fingers into an already settled matter.

Being more reclusive than normal isn’t always a worrisome thing. Your wife probably needs some more time to become the person they were before that particular argument. Let their emotional imbalance and stress levels settle down until they return to you on your own. Don’t forget to do wellness check-ins on them just to check they’re doing fine and not feeling more debilitated.

Give Couple’s Counseling A Chance

Talking to a counselor, psychologist, or couples therapist miraculously increases your chances of saving your relationship. Your wife’s nagging antics must have some sort of reason behind them. Maybe it’s because of an undiagnosed psychological disorder that she is acting the way she does now. Perhaps there’s some issue with your behavior towards her or the state of your marriage that seems to bother her so much. Perhaps she resents you for something you did in the past.

Couples counseling opens the door toward so many domestic topics that often go unheard of. It gives a couple a space to let everything out. Once everything’s out in the open you can clearly establish boundaries and discover ways to find common ground without any judgment. If the reason behind your wife’s alleged craziness is an undiagnosed mental condition then a counselor can suggest separate counseling sessions or refer her to a trusted therapist.

Try To Become An Active Listener

While going through our daily routine we talk to people, listen to what they have to say but don’t really pay attention. It’s the lack of active listening skills that damages our relationship so much. Dealing with a crazy wife requires that you’re actually paying attention to what she wants instead of merely pretending to listen. If you’ve decided to give your marriage and your spouse a chance then make sure you’re letting your investigative juices flowing. You need a reason behind this nagging behavior, rude responses, and sudden meltdowns. Don’t hold back while asking questions like;

Actively listen to the way she responds to these questions and you’ll land on the true culprit behind this mess.

Before we end this discourse, you must understand any abusive situation isn’t worth your time or psychological well-being. Ending a marriage is never the end of the world. If you’ve tried your best but the situation still seems stagnant then there should be no shame in choosing the escape root. Any indication of verbal, physical, or emotional abuse should be your cue to leave that person behind.